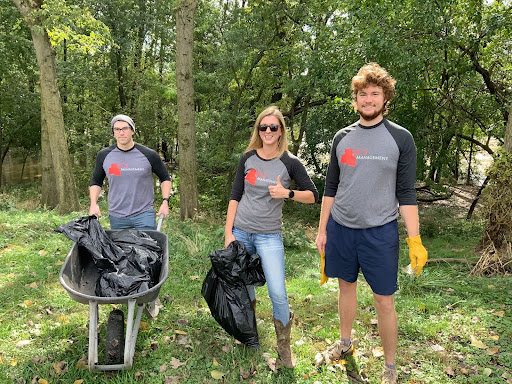 Advocating for clean water and environmental stewardship is the basis for all that we do at BCS Management. Every year for 5 years in a row, the BCS Management team and friends have taken an afternoon to remove (and properly dispose of ) garbage from along the first stretch of the Maumee River.

The weather cooperated (mostly) for the 5th anniversary of our favorite “give-back event”.  Unfortunately we were not able to gather as much trash as we normally would as recent rains had flooded most of the basin where refuse typically accumulates. We also had a couple of ill team members and a significantly lower number of helpers than in past years. Still, over 10 garbage bags were taken away in just an hour!

Next year, we hope to have a more accessible bank and more help to cover the area pickup.

Thanks to Dale Buuck of the Whitley EDC and Todd Lassus, Lassus Handy Dandy for helping us out (they did not love their picture being taken…)!